Gothenburg, Sweden (February 3rd, 2017) — Eliq, the Swedish energy engagement company has won the Energy Monitoring Solution of the Year award at the 8th Smart Energy Europe and Future Utility Summit in London, UK. The award is in appreciation of the company’s new energy engagement app, which was deployed across Scandinavia in 2016. 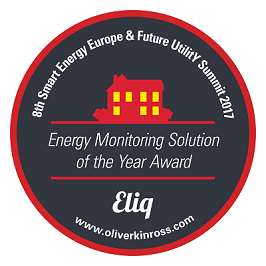 Eliq has partnered with utilities such as Norwegian energy retailers Eidsiva Energi and Gudbrandsdal Energi in bringing its solutions to market, increasing customer engagement and driving the development of new revenue service-based revenue models for its partners.

The Eliq app enables consumers to track, understand and manage their energy consumption in real-time, rendering tremendous savings for the user with an increased convenience and peace of mind. The app feeds data off the company’s own IoT sensors for real-time data capture or works with 3rd party data capture devices.

In 2017, Eliq is poised to expand into new markets and further accelerate its product development.

As regulators in countries such as France, the U.K. and Ireland call for large scale deployments of solutions to help consumers manage their energy, the company expects the market to grow rapidly in the next few years.

“We are thrilled to see the excitement our product is creating outside of Scandinavia, now that we’re introducing it on the European market”, said Håkan Ludvigson, CEO of Eliq.

Håkan continues, “European energy retailers need to adopt new business models and new technology to reshape its business for the future – and the future is all about the data.”

You can find out more about which cookies we are using or switch them off in settings.

Cookies are small text files that are placed on a computer by a web server and works just like an ID card. Cookies enable the website to remember important information, which makes your visit more convenient. Most websites use cookies to enhance the user experience and usability for you as a visitor. A cookie is a so-called passive file that can not spread dangerous software or viruses on your mobile device or computer. There are two types of cookies, permanent cookies and session cookies.

Permanent cookies
This cookie saves a file that remains on the user’s computer. The cookie is used to tailor a website to the user’s requirements, choices and interests, as well as for statistic follow-up, among other things.

What cookies eliq.io use and how to disable them

Read more about the cookies that are used on this website, their purpose, their lifespan and/or change the settings for them by switching between the tabs to your left.

Necessary cookies are needed in order for the website's basic functions to work correctly and for us to be able to save your choice of cookies. Functional cookies makes it possible to save data that changes the appearance or functions of the website. For example, your preferred language or the region you are in.

sib_cuid
Purpose: Used to collect information, in personally identifiable from, such the length of visit on a page, number of visits to the site, name and email (if provided by the user) etc.
Issued by: SendInBlue
Lifespan: 2 years

If you disable this cookie, we will not be able to save your preferences. This means that every time you visit this website you will need to enable or disable cookies again.

Please enable Strictly Necessary Cookies first so that we can save your preferences!